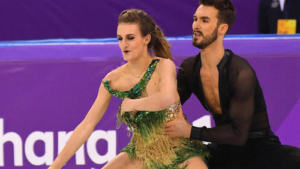 It’s always and forever a matter of perspective.

That’s not a new message from us, and it’s probably not news to you. But something I saw recently really brought the message home to me in an emotional way.

Many of you probably saw it too.

The Olympic ice dancing competition this year featured a couple of standout pairs … Tessa Virtue and Scott Moir of Canada and the French pair of Gabriella Papadakis and Guillaume Cizeron.

Moir and Virtue were brilliant … flawless. Their performances were magnificent. They won the individual gold medal for the second time, along with a team gold earlier in the games.

But here’s the thing. The French couple brought something special … a certain je ne sais qua … to their performance that would have earned them the gold medal in the event.

But something happened …something that had nothing to do with their actual performance … and yet it cost them the gold medal.

If you’ve never seen a skating competition, the skaters perform twice over the course of two days and the scores are added together.

The French couple scored a little better in the longer second program … the free dance. But in the short program, the clasp holding Papadakis’s outfit up around her neck snapped and she was left with just a couple of very thin, fairly loose straps holding her top in place. That’s not good when your partner is spinning you around like a top.

She did a helluva job considering the circumstances, but it was clear her concern over possibly revealing herself to several hundred million people watching on TV kept her from focusing quite as intently as she might have on the performance. And they ended up slightly behind after the short program.

Just think how you’d feel, after all the training you’d put in and sacrifices you’d made, to come up less than a point from a gold medal simply because a stupid clasp came loose.

You’d be extremely disappointed. That’s a given.

But here’s the more important question: If you’re Papadakis and Cizeron, what do you say to yourselves now?

Do you say, “We did what we came here to do and if that clasp hadn’t broken, which is not something we had any real control over, we’d have the gold medal. We really are the best in the world. C’est la vie.”

Or do you assume the mantle of the victim?

“How could life punish us like this after all we’ve done to be the best we could be? It’s so unfair. Silver … puh!”

And what path do you choose going forward?

Do you choose to believe you’re snakebit and that things are destined to not work out for you?

Or do you choose to prove you really are the best ice dancers out there?

The key word is choose.

Disappointment kinda comes with the territory when you come up short of achieving any goal that’s really important to you, but victimhood is always a choice … and not one that leads to any happy outcomes.

I hope they’ll choose to brush it off and come to treasure their silver medals as they move on to ever greater things.

Great athletes tend to possess the skill of letting go of what’s done and can’t be changed. They’re usually better able to move on with a fresh vision and renewed purpose than the rest of us, because you don’t always win at sports. You have to be able to learn from your losses and deal with disappointment early on if you’re ever gonna be truly great at what you do.

That’s a lesson we all need to learn … multiple times it seems.

By the way, the American team, the Shibutanis, who performed at their personal best to finish in third place, some 13 points back, were overjoyed with their bronze medals.

It’s always and forever a matter of perspective.