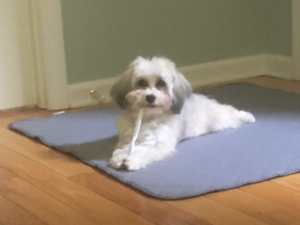 The toothbrush game is worth examining, because it reinforced a particularly important message.  We couldn’t get him to open his mouth so we could brush his teeth.  The only way was to forcibly pry his jaws open.  He wasn’t having any of that.  And, besides, that’s just not our style.

So, we made it a game.  Here’s some good tasting enzymatic tooth gel buddy.  I’ll put it on a toothbrush you can lick and play with.  And once you’re playing with it, I’ll play along with you and work the brush in and around your teeth some.

It worked.  Ya catch more bees with honey.  Ya win over more hearts with sweetness.  The use of force pretty much always represents a form of defeat.  It says we weren’t creative enough or patient enough to achieve a win-win outcome.

So, I ask you, would we not all be better off if we found joy in the simplest things more often … got over troubling things more quickly … approached life as a series of games … and threw ourselves fully and joyfully into the endeavors that are important to us?

Yeah, I think we would.  Wisdom from Willy, the life coach.

By the way, Willy’s sweet to everyone he meets and really excited to see them.  Hmmm … not a bad trait in humans either.

I love the little guy.

Now, if we can just get him to go outside to do his business every time.  THAT will be a happy day.