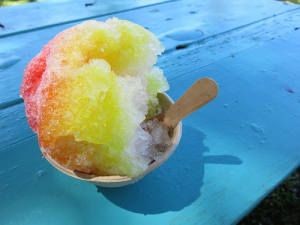 There aren’t many eight-year-olds who have their own businesses, but this little guy does. His name is Thomas Compton. He’s from South Carolina and he raises chickens, goats, and calves. He also tends his own garden.

He’s been selling his produce and 3-4 dozen eggs a day to the local market, as well as marketing his produce directly to the public on Saturday mornings at the community tailgate market since he was three years old. And he’s been saving his money.

Last year when he was seven, his parents asked him what he wanted Santa to bring him for Christmas.

Not your ordinary kid. But he was serious. He wanted a shaved ice stand.

His parents did some research and had to let him know that the kind of stand he wanted … the kind of heavy duty trailer, outfitted with sliding windows, that you see at fairs and festivals … was going to be a little too expensive for Santa. Undeterred, Thomas had a proposal for the big guy. He would contribute all the money he’d saved from his business since he was three if that would help swing the deal.

Santa was apparently duly impressed, because when Thomas woke up on Christmas morning, Santa had brought him a shiny new yellow shaved ice stand with the name of his new business professionally painted on the side.

Flash forward to today. His business is going like gangbusters in the alternating desert-like or jungle-like conditions we experience in SC in the summer.

He’s open from 2-6 pm, three days a week. His normal base of operations is his Mom’s day care center … Miss Tammy’s Little Learning Center. He also sets up at the grocery store parking lot on Saturdays from 10 am to 8 pm and travels to big events and festivals, high school baseball playoff games, and other local gatherings.

He operates the stand all by himself, except for his one part-time employee, Sarah Brock. They went to daycare together … so they go way back. His mother also helps out some when he gets busy, plus she’s the driver. He keeps the stand spotless and, by all accounts, provides a first-rate customer experience.

Now, before you think this little fellow should be out playing and being a kid, he plays and has fun with his friends too. He does plenty of normal kid things, but he just loves to come home in the afternoon, scoot out to the garden in his utility vehicle and go to work. He enjoys it. How’s that for refreshing in the age of the omnipresent video game?

Oh, by the way, he saves most of his money, but he has plowed some of it back into the business. He bought a lightly used Dodge Ram truck to pull the Shaved Ice stand around. He’ll be able to drive it in about 8 years.

When his parents asked him how he came up with the idea for a shaved ice stand, he said, “It’s something I could work at that could be mine.”

A simple statement, but profound all the same.

“Something I could work at that could be mine.”

Blessed be the entrepreneurs.