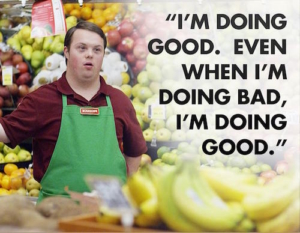 So, which is it? Well, that’s a matter of pure conjecture and opinion, isn’t it? You might even call it semantic hoop jumping. Okay, maybe. But it’s an important question to answer for yourself.

Well, I’ve noticed those who live their lives as though everything is a miracle tend to live better, happier, more fulfilled, more joyful lives.

Why? I think it’s largely because they appreciate the wonder of it all. And they see their existence on planet earth as an incredible gift. There’s a world of possibility in that outlook on life.

Contrast that with seeing yourself and the world we live in as nothing all that special. Ugh.

We just watched the movie, Where Hope Grows. It’s a beautiful little film. One of the main characters is a kid named Produce. He got the name because he works in the produce section of the grocery store and wears a nametag with Produce on it.

When he’s asked how he’s doing, he tilts his head slightly sideways, looks intently at his questioner, and says … “Incwedible” … as in, so overwhelmingly wonder-full, it’s hard to really, fully express.

His speech isn’t quite normal.

You see, Produce was born with Down syndrome.

He isn’t able to do a lot of things other people take for granted, but he takes care of himself, works for a living, performing at a high level … and he’s done a nice job of integrating himself into normal everyday life.

What’s more important … he’s wise. He’s caring. He’s courageous. He’s honest. And yes, he’s smart … smart about the things that count. He’s someone you’d be proud to have as a family member or call your friend.

And it’s not just that he has a “good attitude.” It goes deeper than that. He seems to appreciate the gift that is his life, even when things aren’t going so well.

Amen. Etch that into stone somewhere.

With that one statement, he captures the essence of living a good life.

“Good” doesn’t mean things always go your way. It’s a trap to allow your happiness to depend on how pleasing your circumstances are. It’s not about the absence of disappointment, or heartache, or loss, or pain.

Produce gets that, because he’s experienced all those things.

It’s about participating fully, joyfully, and feeling good about simply being here, able to appreciate your life for what it is … an ongoing miracle.

I won’t tell you anything about the story itself. Don’t want to spoil it. But the film gets 4 ½ stars on Amazon and deserves it. The plot is somewhat formulaic, but that doesn’t get in the way.

You’ll appreciate the honesty and power of the performances and the depth of the message. It’s a story that gets to the heart of things, and I mean that in two ways … your emotional heart and the heart of the questions … Why am I here and what’s life about?

I know Einstein saw everything as a miracle. He said so. He was always struck by the wonder of it all. The physics aside, he was one smart and insightful man …