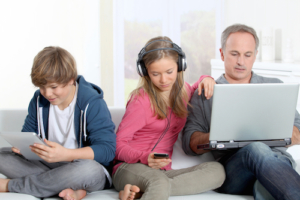 In part one, I outlined the problem: The undisciplined use of electronic technology takes away from face to face human interaction time … and that is not the path to a happier, more fulfilling personal and family life.

That’s the context. Here are the problems … gleaned from Dr. Mercola’s website:

“… about half of U.S. adults say they can’t imagine life without their cell phones, and 43% are ‘constant checkers.’ And those who are have significantly higher stress levels.”

Oh great. Just what we need.

According to the American Psychological Association …

“35% of constant checkers said social media made in-person meetings with family and friends less likely. 42% worry that social media may be having negative effects on their physical and mental health.”

“58% of parents said their child is attached to their phone or tablet, and 48% described regulating their child’s screen time as a ‘constant battle.’

Nearly 60% worry about the effects of social media on their child’s physical and mental health, and 45% said technology makes them feel disconnected from their families, even when they’re together.”

I’m sure you’ve all had a moment where you’re in a public place and you look up and absolutely every person in sight is on a phone or a tablet. They’re busy communicating, but not with anyone around them. Sometimes it’s laughable. Sometimes sad. Always a little odd.

We’re not in Kansas anymore. The world we grew up in is gone … for better or worse.

It’s true … you can access a lot of cool, educational, and entertaining stuff on a screen, and devices can make you a LOT more productive.

That said, when everybody has a device glued to his or her hand 24/7, and it’s affecting the way parents and children interact and causing stress, isn’t it time to say, “Wait a minute, has too much of a good thing become a bad thing?”

It happens so silently, so seductively.

I’m pretty disciplined in my use of my devices, but it still irritates my partner, Tom, when he’s driving and I have my nose in the phone. He’ll say, “You’re missing the blue sky … the puffy clouds … the green fields … the flowering trees.” And I’ll say, “Yeah, but I’m doing this now, so I don’t have to work right up till bedtime.”

“Can I talk to you now?” After he says that a couple of times … I take the hint.

He literally had a dream about throwing cell phones in our lake, wondering how many it would hold till it overflowed.

But our problems aren’t limited to just compulsive checking and use at inappropriate times, such as at the table when you’re eating … things I don’t do.

Texting while driving has caused accident rates to shoot up.

There are plenty of other issues, like executives who can never get away … never disconnect, even on nights, weekends, or vacation. But this one takes the cake:

“So strong is the allure of technology that one survey described it as a ‘fifth sense’ to youth, with half of 16 to 22 year-olds saying they’d rather give up their sense of smell than technology.”

Cyborgs in the making.

Last thing. Did I mention the average smartphone is 18X dirtier than a public toilet seat? Yuck!

Okay, that seals it.

The answer? It’s simple. Be mindful about your use, and don’t let your screen time displace quality time with friends, family, and associates.

Will that be easy? Probably not … but it’s worth it.

Oh, and scrub your cell phone down. That thing’s filthy!