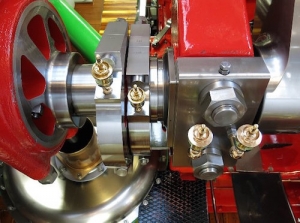 Back in the heyday of the passenger ship, there was a man who owned a steamship with an engine that wouldn’t run properly no matter what his crew did to fix it. So, he called on an outside expert to diagnose the problem and get the engine running smoothly again.

It didn’t take long. The master mechanic came on board, listened intently to the engine for a while, reached into his toolkit, brought out a hammer, and fetched the engine housing a mighty whack. Instantly, the engine started humming like it was new.

The owner was astonished, but delighted nonetheless. He asked the man how much he owed him. The mechanic replied, “$400.”

The owner was taken aback. That was a lot of money back then!

“But you weren’t even here five minutes. I’m going to need to see an itemized bill before I pay you a sum that large”

“Fine,” said the mechanic. He wrote out the bill on the spot.

I love that story, because it illustrates so clearly what’s fundamentally wrong with experts defaulting to charging by the hour for their services vs. pricing according to the value they deliver for their clients … and what the market will bear.

If the mechanic had charged by the hour and was on the job less than five minutes, at the going rates of the day, he might have literally made no more than a couple of bucks. What’s the point of going to the trouble of becoming a bona fide expert who can get results if you aren’t going to make any more than the employees who’d already proved they couldn’t fix the problem?

Think about it. What was it worth to the owner of that steamship to have the engine running right when nobody else could fix it? Plenty.

The bigger and more intractable the problems you can solve for people … the more profound and satisfying the results you help deliver… the greater the compensation you can and should command.

But what I see many of my coaching clients wanting to do is price their services in terms of hourly rates that position their offerings as a bargain, so they’ll get more business.

We understand their interest in generating more business by making their pricing look attractive, but, honestly, most don’t have to worry about that. They just think they do. If they would focus, instead, on highlighting the value they can provide vs. the cost of the service, they’d get more business AND be better rewarded for the results they help produce.

Sure, we understand that the less differentiated you are from others serving your same market … the less specialized and amazing your skills … the more mindful you have to be about making sure your pricing is competitive. But if that’s currently the case, the challenge is to make sure you separate yourself from the pack somehow, so you’re perceived as special and not an interchangeable commodity.

Let’s take acupuncturists, for example. What makes one different from the rest?

If they all look the same to you as a potential client, you might be influenced somewhat by the rates each competing practitioner charges.

But, if you’ve been trying to get pregnant and nothing has worked, and you know a particular acupuncturist specializes in fertility issues and has a phenomenal track record of helping women get pregnant, would how much she charges really factor into your decision-making very much? Not likely.

To a woman who desperately wants a baby, that acupuncturist looks more like a potential savior than just another one of the many medical professionals she could find listed in the yellow pages. How much the acupuncturist makes an hour would be the least of that prospective mother’s concerns!

Some people worry that they’ll be charging more than they “should.” Give it up.

Value is subjective. How much is that baby worth to a woman who thought she could never have children? What price “should” the practitioner charge for helping effect that particular miracle? How modestly or how well should that acupuncturist be compensated?

That’s for the two people directly involved to decide, but I’ll tell you one thing for sure. If the reward isn’t commensurate with what it takes to be able to deliver the results, there will be fewer people performing the service and fewer women getting flowers on Mother’s Day. That benefits no one.

If someone has a big problem, a big need, a big dream, and you can help them solve it … satisfy it … realize it, you are worth your weight in gold. You’re exchanging big value for big value.

And yet, we see self-employed experts in their field thinking and acting like employees!

They’re selling their time rather than the results they can produce. With some notable exceptions, that’s a mistake.

So, which comes closer to describing you? Wage slave or invaluable miracle maker? Most of us will land somewhere in between, but hey, which would you rather be?

Okay, then my advice is to start acting like it and pricing your services accordingly.

Deliver on any of those or something similarly life-changing and you’ll be on the road to an extremely fulfilling career that rewards you in every way.

And absolutely no one will count the number of hours it took to make it happen.