What’s Luck Got to Do With It? 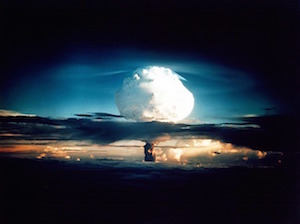 Tsutomu Yamaguchi was an extraordinary man.  He died in 2010 at the age of 93.

What made him extraordinary?  He was either the unluckiest man in the world or the luckiest.  Maybe both.

Mr. Yamaguchi was in Hiroshima, Japan on business on August 6th, 1945 when the atom bomb was dropped on the city.  He was less than 2 miles from ground zero.

Despite his injuries … ruptured eardrum, temporary blindness, and burns on one side of his body … he managed to make his way back to work at his home office on August 9th.

His home office … in Nagasaki.

He was telling his boss about the Hiroshima explosion when the second bomb detonated.

He’s the only person certified to have survived both explosions.

Now, what were the chances of being in both cities when the bombs were dropped?  Could his luck have been any worse?

And what were the chances of surviving both blasts … and living to 93?  Could he have been any luckier?

On a personal note, I was just in a car accident. No one was hurt. So, was I lucky or unlucky? I’d say anytime you walk away from a car wreck, you’re lucky … or better yet, blessed.

You know, maybe luck’s not a very helpful concept.

Let’s talk about it.

How can anyone deny that stuff happens beyond our control … and we either win out or we get sucker punched, all purely by chance?

It’s pretty hard to deny.  And if you want to believe in luck, you’ll have plenty of evidence to support that belief.

And yet, what does believing in luck do for you?  Nothing.

Sure, good things happening to us make us feel good and I suppose it helps to believe you’re lucky, but here’s the insidious part.

Believing in luck makes you subject to the whims of fate and sets you up to be a victim … and descend into a slough of despair at any given moment when things go wrong.

And that feeling of being cursed by bad luck can persist and create a doom loop where you think you’ll never catch another break.  Like the old blues song goes, “If it wasn’t for real bad luck, I wouldn’t have no luck at all.”

That’s a prescription for misery.  So, here’s a radical idea:

What if you chose to believe that luck played no role in your life at all and behaved accordingly … unconcerned with whether that’s actually true or not?  You just act as if it’s true.

You’d behave as if the way your day … and your life … turns out is entirely dependent on you … your vision, your clear intentions, the purity of your vibration, your creativity and ingenuity, your dedication, your focused action.  It’s the opposite of buying lottery tickets, hoping to hit it big.

The good news?  There’s no downside to thinking this way.

The other useful belief?  “Things always work out for me.”

No.  It’s a way of saying you believe your vision, your intention, your vibrational alignment, and your creative efforts can’t help but create good mojo and produce excellent results … even when it seems as if things aren’t going your way at the moment.

THAT is a success mindset.  And nothing about it relies on chance.

Tsutoma Yamaguchi was clearly a “victim.”  The guy was atom bombed twice.  His story defines being in the wrong place at the wrong time.  But victimhood requires buy-in.  He didn’t buy in.

He lived a long, productive, happy life after the war.

When it’s all said and done, it’s not about whether you get lucky in life.

It’s about deciding to make your life good, to make it work, to make it joyful and fulfilling …

And knowing that’s it’s all up to you.